TRM can supply a "Plug and Play" kit of components suitable for converting milling machines into a precision CNC!

CNC Controller, Electrical Cabinet, Cables and Motors are all supplied as a kit to enable quick installation to machine that either needs upgrading or in the case of a manual machine, retrofitting to add CNC functionality.

Many machines fail because the electronics are old and cannot be repaired. The mechanics however, tend to be still accurate and serviceable therefore our kits are intended to replace the likes of Fanuc, Heidenhein, Anilam, Interact and Siemens to name a few.

Electrical installation could take 1 day or less! however on a full retrofit leadscrew replacement, ballscrew ordering, pulley mounting and guarding of the new motors and pulleys must be taken into account. Generally if your machine is leadscrew driven these will need to be replaced in order to get accuracy and repeatability due to the play which is inherent in a leadscrew assembly. A partial CNC system can be run with leadscrews if the programming takes into account the amount of play, however it will not be possible to machine arcs of more than 90' due to the fact that at least one axis will need to reverse and the play will create a step in the arc. As standard the kit automates the X and Y axis. A third axis is available to automate the Z axis if required and this is done by attaching an actuator to the front or side of the machine as usually these will be manually driven by a lever. On a lot of Anilam, Heidenhein etc. controlled machines the Z axis is already present making installation much easier.

There are two main controllers available to choose from. These are a portrait style and a landscape style and each comes in two versions. With a surround lid, allowing boom arm mounting etc. or with a smaller rear cover to allow the controllers to be panel mounted if there is an electrical box or pedestal that the unit is to be fitted into. Both styles  have 10.4" displays and qwerty keypads and run the same MAP software where G-Code can be loaded and processed. Extra code can be programmed directly in MAP to aid machine setup and control I/O for fans, relays, lights etc.

The examples of the CNC Controllers below also show some degree of customisation. Where guards and additional buttons are required, TRM can modify the CNC Controller to suit the machine and provide custom wiring looms. 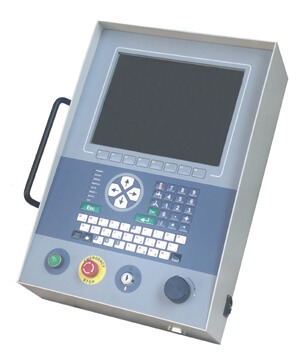 The full colour TFT displays ensure excellent readability at distance and at different angles which is important as operators need to be able to see the part being cut and the display at the same time.

Large tactile keys are used on the keypads so that operation with gloves is possible, this is where we find touchscreen fails. If the screen becomes coated with cutting fluid or thick gloves are worn the display can cease to operate until it is cleaned and this then leads to scratching of the display from swarf etc. Our design of keypad is used all over the world and we have found it to be so rugged we never have units back for faulty keypads!! Occasionally, after many years of service in the field, we do get units back for a new overlay due to wear but this is a relatively inexpensive replacement part and easily replaced, we are currently still supporting controllers that we have manufactured in the 1990's!! 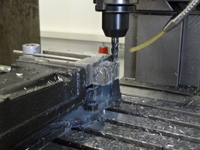 The electrical kit supplied will already have been wired to enable fast installation to the machine. PVC Conduit is used to protect the cables and ensure that they do not become damaged by coolant sprayed onto them. This allows them to be easily clipped to the machine out of the way. There are usually two cables from the cabinet to the controller and two to each of the motors.

The spindle cable may be utilised that is already on the machine in which case changing the plug to suit is an option. We can either support a remote switch operation or via the cabinet and controller to enable and power-up the spindle. On the Ajax machine detailed below an adjustable spindle speed is attained by a handle on the side of the head of the machine. This is usually kept the same way and therefore the original spindle off/on can be kept if necessary. An AC drive is an option on some machines as the CNC Controller can output a speed command based on the G-Code file being run.

As an optional item to the kit we can provide a remote pendant to aid setup of the machine. Usually this is wired in such away that the machine is put into a low torque mode to limit the danger to the operator. 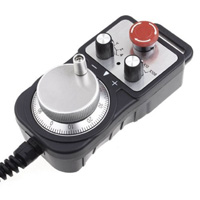 With these basic controls the axis can be selected that is to be moved. There is also a speed option that allows the machine to be run at slow pre-defined speeds to aid both precision setting and also quickly moving around large tables.

These are a good quality cost effective option to add to a machine as they allow close inspection of the part and tool while being setup.

Generally ballscrews are found to be still accurate on old machines however for machines that have had a lot of wear it may be necessary to replace both the ballscrew and nut to ensure that the new updated system will be as accurate as possible.

Where the leadscrew needs to be replaced we work with companies like Matara and Abssac who will machine the ballscrews to suit the application and supply nuts to fit in-place of the leadscrew nut.

A close up of the two types are shown below. As you can see in the ballscrew on the right the balls will rest tightly into the precisely machined screw so forward and reverse motions can be made with minimal error. In contrast the leadscrew on the left is not precisely machined and as the nut needs to have clearance in order to rotate, the amount of play in comparison is high and is not feasible for a precision CNC Controlled machine. 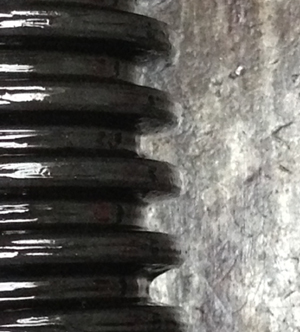 Leadscrews are an excellent basic method of easily moving an object and if managed by a skilled operator some complex parts can be produced. Normally though for accurate parts with arcs a leadscrew is not enough, on this type of machine a rotating bed would need to be installed in order to gain the accuracy needed.

For help with installation within the UK Bespoke Machines offer an installation and training service tailored to your needs. Outside of the UK please call or email and we will put you in touch with a distributor in your area.

A typical installation on a ballscrew driven machine would be:

The upgrade of an old Ajax imperial machine was required and inspection showed that the machine was in excellent condition despite its age and would be suitable for upgrading.

The old DRO, Wiring, Electrical cabinet and switches were removed leaving a clean machine ready for the installation of the new components. We installed the controller to the existing DRO arm with an additional bracket to allow tilt and rotate to suit different operators.

The motors were left loose and wired along with the encoders and a protective conduit fitted. Finally the cables to the controller were attached and powerd up to check that the system was functional and stable.

Then following removal of the X leadscrew the heavy bed was removed to allow access to the XY nut casting and oiling system. The Y leadscrew was then also removed which allowed extraction of the nut casting. The Bronze/Brass sleeves were slid out and the keyways and locating pins were removed to allow installation of a ballscrew nut with a 40mm OD body. This minimised machining and ensured alignment was maintained across both axis. The ball screw was slightly smaller in diameter at 25mm however due to the improved performance the load being moved was well within it's capabilities. 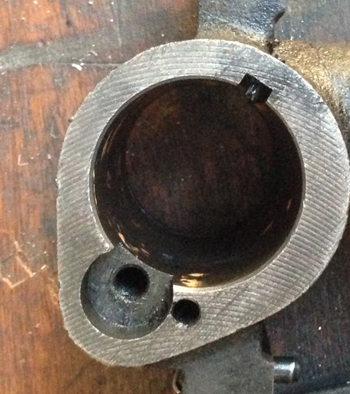 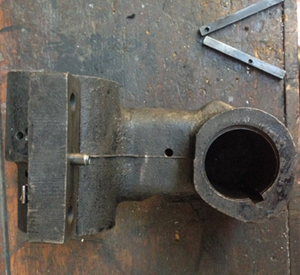 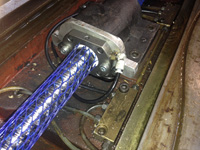 Due to the casting not being wide enough to be drilled and tapped, an adapter plate was made to allow pickup on the ballscrew nut holes and the XY casting holes. Unlike leadscrews, there is a danger with ballscrews that winding the nut to the end of the travel could result in the ball bearings being lost and a new nut having to be ordered. For this reason we leave cable ties on the screw to prevent the nut getting close to the ends. Such is the high effiency of the screw, tilting it up could cause the nut to run down and off the end! 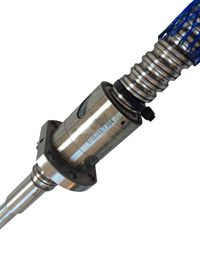 Some examples of hand-wheels are shown below. Whilst it is preferable for safety reasons to remove the hand-wheels altogether, it may be sometimes necessary to use the machine by hand. The original handles were of a dangerous type and could easily catch clothing, break fingers etc. For this reason we suggest solid discs as shown below which limit any of the above injuries occurring.

Each installation should be assessed by the safety officer of the company and any risks eliminated before an upgraded machine is used. 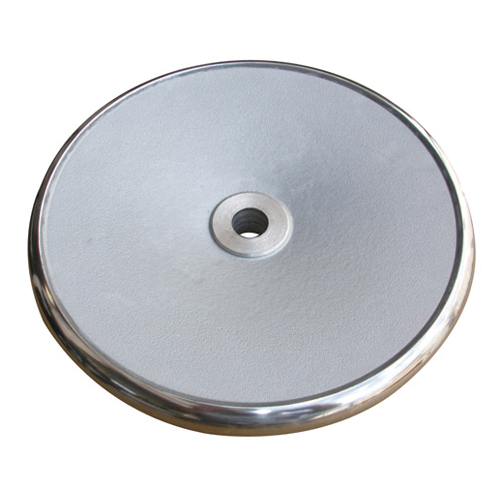 Once the mounting arrangement and handle modifications were taken into account the dimensions were sent off to the supplier to machine the new ballscrews to size. Once the ballscrew was received the installation was smooth, ensure that all slides and oil-ways are clean before re-assembly.

Need to know the cutting speed of a cutter?:

Where D= Diameter and n=RPM

For further information on leadscrews check out this wiki page. and ballscrews here.